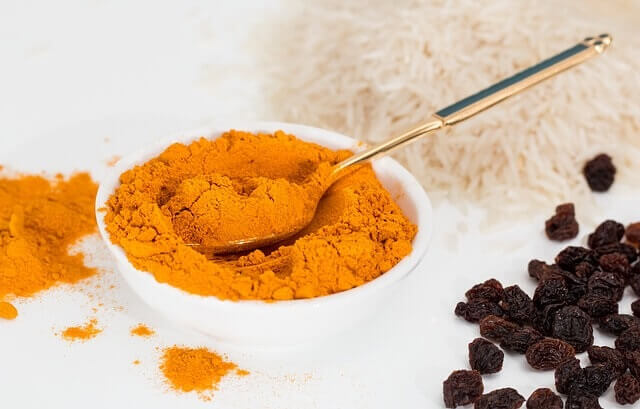 Did you know that turmeric (also called turmeric or “Indian saffron”) is mentioned in ancient Asian writings, but not as a spice (as we know it today), but as a very good dye and, at the same time, as a natural treatment for a wide range of conditions (such as bronchitis, eczema, kidney infections or fever)?

This spice is more and more known and used in the European area, so it is worth discovering the benefits it brings to your health and the reasons why you should start using it too! In the article below we answer all the questions you have about turmeric (“What does it taste like?”, For example) and we offer you interesting tips on all the uses of this wonder spice.

Turmeric (on its Latin name, Curcuma longa) is a plant of Asian origin, from the Zingiberaceae family, a good relative of ginger, with which it resembles both in shape and in terms of flavor intensity. Turmeric powder is obtained from the underground stem of the plant (rhizome), which is boiled, dried, and finely ground. Turmeric is grown in China, Taiwan, Indonesia, and on the African continent, where the climate is warm, the usual temperatures are around 20-30 degrees and rainfall is abundant throughout the year.

In traditional Indian cuisine, turmeric is a beloved spice, known to be widespread due to its specific aromatic taste and ability to color the dishes, which thus become more visually appealing and seem to contain more fat than they actually have. The specific color of turmeric is given by curcumin (considered by some specialists to be the most powerful natural anti-inflammatory compound). In addition to curcumin, turmeric also contains carbohydrates, proteins, fats, vitamins B2, B3, B6, C and E, minerals (sodium, potassium, calcium, copper, iron, magnesium, manganese, phosphorus, zinc), essential oils and fiber.

Turmeric has, as I said, a specific taste, strongly aromatic, somewhat similar to pepper as hot and slightly bitter, at the same time. Because its aroma is strong, its use in culinary preparations must be done without exaggeration, there is a risk that, instead of potentiating, it will cover the flavors of the ingredients used.

In what form do you find turmeric?

Turmeric is most often found in powder form because it is the easiest way to keep it for a long time and, at the same time, the easiest to integrate into your culinary preparations. In addition, turmeric extracted from turmeric can be found in health food stores and in the plafar type and in the form of pills. Since we know how good it is for health, we decided to bring it on the shelves of our online store. At Sano Vita, you will find, therefore, the best quality turmeric, at an attractive price.

Used as a spice and in natural medicine, turmeric has nutritional properties that make it an extremely good food for your body. The health benefits of turmeric are undeniable and we will discuss these in the following.

Turmeric has a neuroprotective role

Research into the ability of turmeric to fight the relentless Alzheimer’s disease is not uncommon. One of the most important highlights the fact that the degradation of nerve cells is slowed by the action of curcumin in turmeric. This prevents plaque between neurons, reduces oxidative stress, and improves cerebral blood flow.

It is known that for a detoxified organism, which performs its functions correctly, a healthy kidney pair is a basic condition. When they are affected, a number of toxins pass into the bloodstream, with the most serious consequences. Turmeric supports the proper functioning of the kidneys, and frequent consumption of this spice prevents water retention in the body.

Studies have shown that turmeric can help lower “bad” cholesterol in your blood, keep your arteries clean (thus preventing cardiovascular disease) and improve endothelial function (the tissue that surrounds the heart and blood vessels). And so the right diet helps you have a healthier heart!

Turmeric is one of the most well-known foods with an anti-inflammatory effect, so adding it in culinary preparations not only helps you fight inflammation but also acts preventively, preventing them from appearing. Anti-inflammatory foods are known for their effect in preventing and combating chronic and degenerative diseases – heart, cancer, Alzheimer’s.

There is no cure for cancer yet, but a healthy diet, based on fruits and vegetables, can increase the effectiveness of your body’s natural defense mechanism against this terrible disease. Regular use of turmeric in your food can prevent the spread of cancer cells, and your body will recognize them more easily and destroy them more effectively. Research has shown that certain forms of cancer (such as prostate, colon, breast, and lung) are almost 10 times less common in India, where a lot of turmeric is consumed, compared to other continents (such as the United States). and European), where turmeric is occasionally consumed.

Turmeric and its antioxidant effect

People who follow a weight loss diet or those who want to maintain a slim figure should regularly include this spice in their diet. Turmeric has the property of helping you get rid of toxins, reduce water retention and have healthy digestion, being a reliable adjuvant in the fight against extra pounds.

At the level of the liver, turmeric acts by increasing the production of enzymes, with the help of which this organ fulfills its functions faster and more efficiently. Under these conditions, the risk of developing liver disease becomes lower.

Especially in the Orient (where it is much better known than in our country), turmeric has been used since ancient times for digestive problems, liver problems, infections of various types, as a healer, and as a remedy for rheumatoid arthritis.

Normally, turmeric does no harm to your health if you use it rationally as a spice. But the excess, as in any other situation, can have unpleasant effects: nausea, indigestion, abdominal cramps, worsening problems related to the gallbladder, or even fever and rash. Turmeric can lower blood sugar, so it should be consumed with caution by diabetics.

Specialist studies that have looked at the action of curcumin, the antioxidant present in turmeric/turmeric root, have shown that it, consumed in large doses, can interfere with some anticoagulant drugs because it thins the blood. So do not overeat turmeric if you suffer from hemophilia or are about to have surgery. Curcumin can also affect cancer drugs used in chemotherapy. However, because the protective role of turmeric in the fight against cancer is also proven by clinical studies, specialists recommend that its use in food should be done only during the breaks between chemotherapy sessions.

In general, turmeric is not recommended for pregnant women (it can stimulate the uterus and cause contractions) and who are breastfeeding (there is not enough information about the massive consumption of turmeric during breastfeeding, to make a recommendation in this regard), and if you want to include it in your child’s diet before the age of 3, it is better to have a prior discussion with your pediatrician.

All about turmeric – properties and benefits for your health

Did you know that turmeric (also called turmeric or “Indian saffron”) is mentioned in ancient Asian writings, but not as a spice (as we know

Better for pets – here’s what action I took

Because of the care for all the tails to find a home through onads.net we have changed the terms and conditions of use so that

How much does the color of the car matter?

There are people in the world of cars that deal with “predicting” the best colors for new cars to be released. Consumer demands weigh heavily